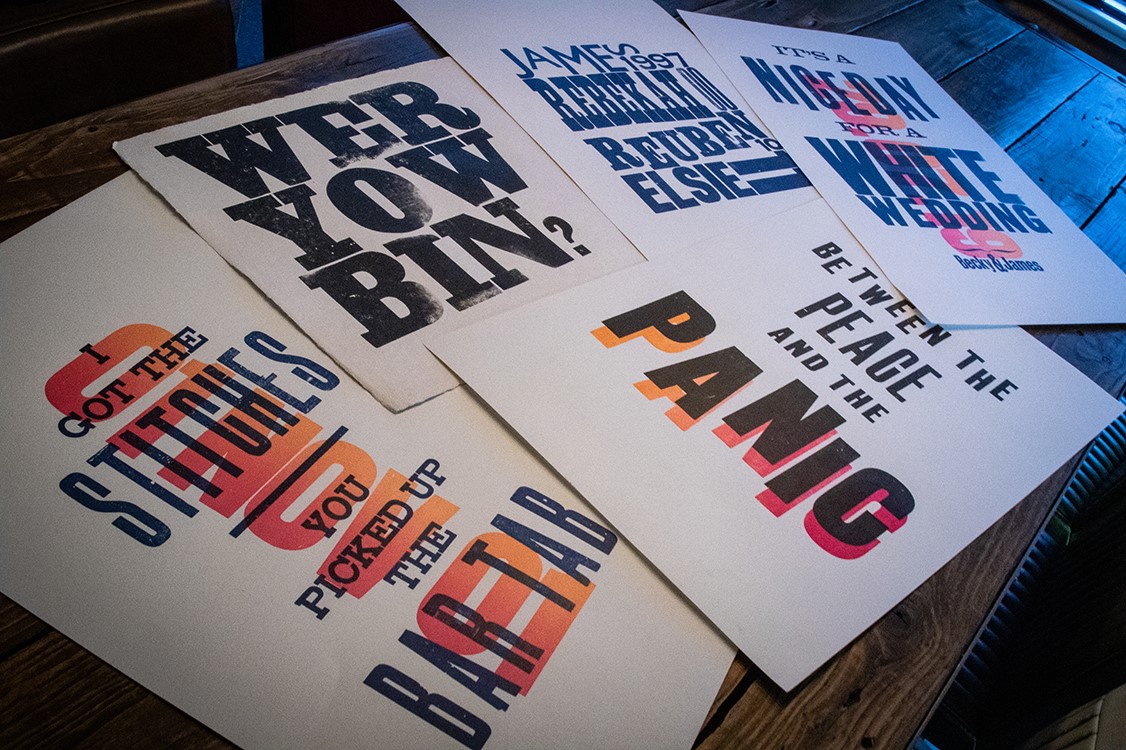 The revival of Letterpress printing

In an age where computers are readily available, it’s hard to imagine or comprehend, but what did we do before this? Well this is what the team of Creative and Artwork at M3.Agency went to find out at a Letterpress and Design agency in Leamington Spa a few weeks ago. Learn more about the revival of letterpress printing now with help from our guide.

What is Letterpress Printing?

Armed with just an idea of a phrase or song lyric we wanted to print, and a little knowledge of the process involved, we arrived early to meet Steve – our teacher for the day. I must admit after working in the industry I knew about letterpress, but had little realisation of just how time consuming and intricate the whole affair would be.

So just as Steve started our day, let’s start at the beginning - just what is Letterpress Printing? Letterpress is a technique of printing where print is produced by raised areas of type, which when ink is applied to the roller and rolled over, it creates an impression on the paper. The ‘moveable’ type as it was known, was set as individual letters and locked in place in a ‘Chase’, with ‘Furniture’ and a ‘Coin’ to make sure it wasn’t going to move anywhere. “What are they?” I hear you ask. Well first things first...

When we arrived at Steve’s studio that Saturday, we had a ‘Chase’ and a metal ruler with point sizes in front of each of us. The ‘Chase’ is basically a hollow frame in which we lay out our type. There were a variety of typefaces with different sizes and weights, to those which were more condensed or expanded and were all kept together in drawers in the studio. We each had to lay out our individual letters (backwards!) in the chase to see how the type would best fit. It was helpful at that point to have a scamp to refer to for an idea of how we wanted it to look. When we were happy, we then had to measure the height of the type and look to find the right size ‘furniture’ (different sized blocks of wood) to place in the space where there was no text or to create the leading between sentences. This was when we all needed quite a good head for maths to make sure it all fit correctly and nothing was raised to have contact with the ink when it shouldn’t. This was then locked into place with a ‘coin’ - a screw held between 2 pieces of metal which when using the Alan key provided, opened up and locked into place against the edges of the chase. The use of this coin is where the phrase ‘to coin a phrase’ comes from. Coining (in the sense of creating), derives from the stamping of metal with a print die. In fact, many typographical references come from this process of moveable type. For example, upper and lower-case text, was so named as it referred to the storing of different type forms in their type cases. Also Leading (the space between 2 lines of type), comes from the strips of lead placed in between the type to create space. Next step was to carefully pick up the chase and contents and place them on the bed of the printer. Ink was applied directly to the rollers using a spatula and then once the ink was evenly spread, test cartridge paper fed through the machine. A piece of carbon paper was placed on top of the chase and its contents to help with the pressure when the roller went over. Breaking it down it sounds an easy process, but believe me - it is a lot more time consuming then you first realise! 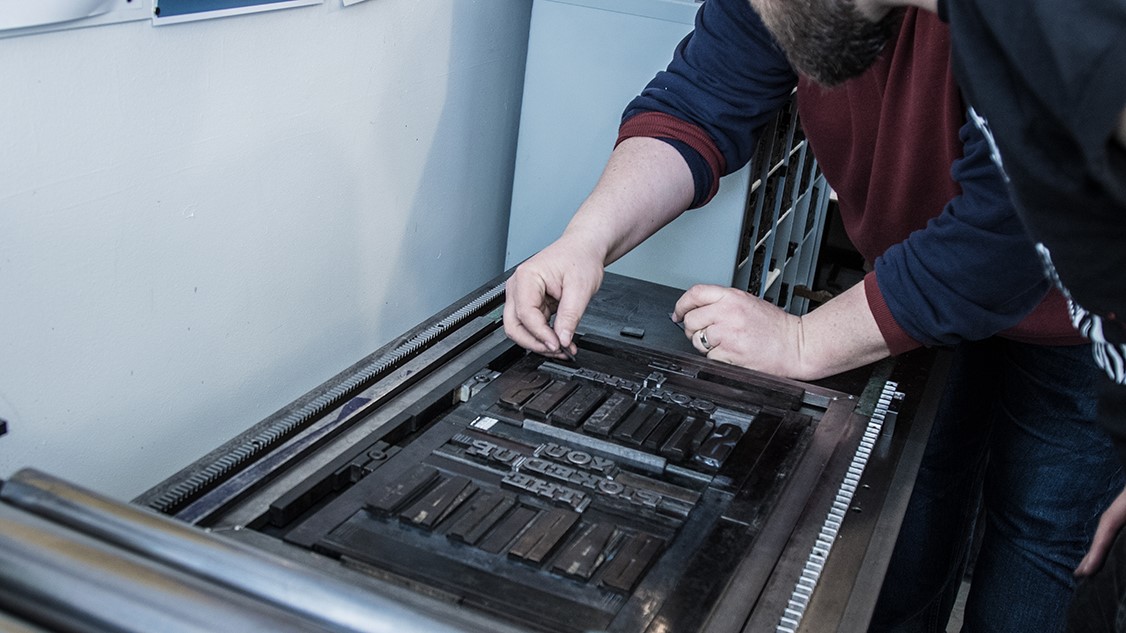 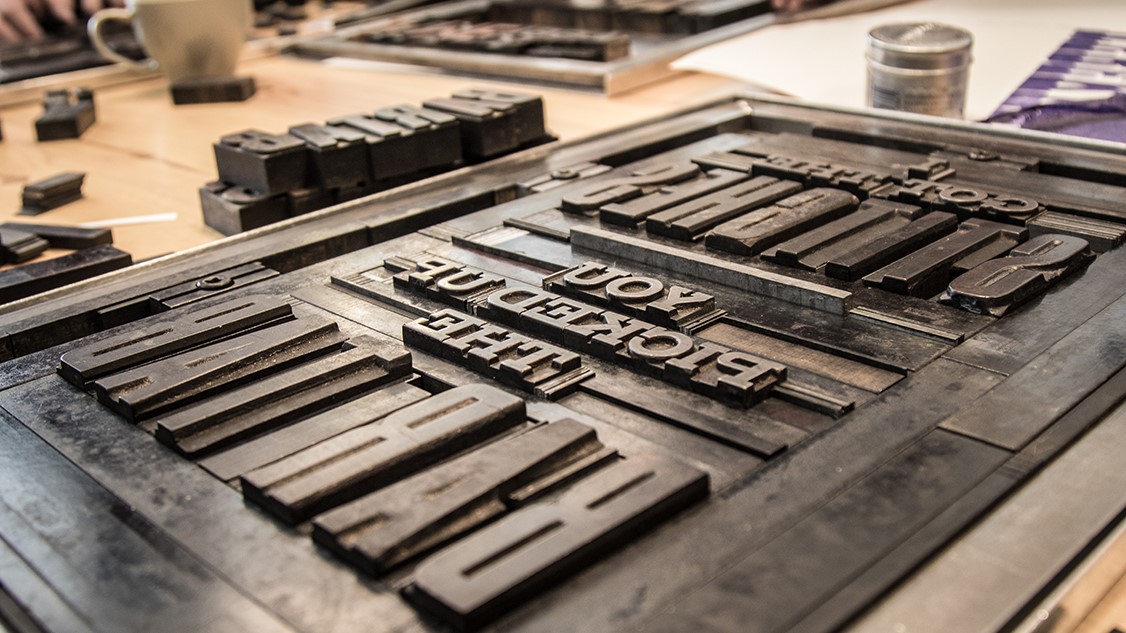 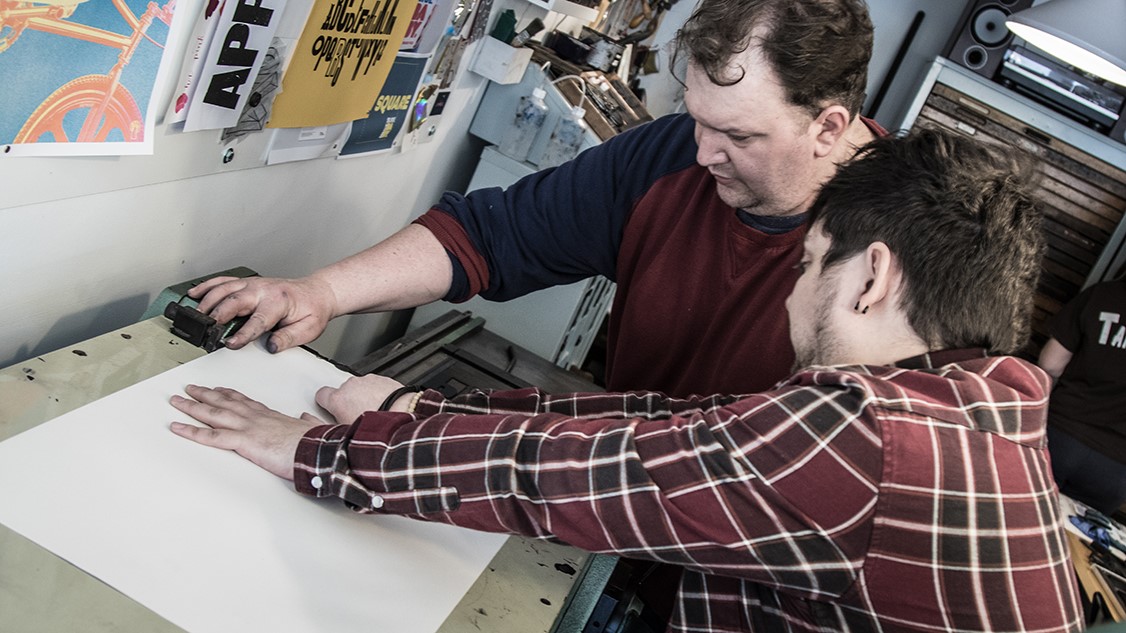 Throughout the centuries, we have been striving to find the most cost-effective methods for printing, and Letterpress printing is one of the earliest forms to producing mass quantities of print. This was first introduced by Johannes Guternberg; a German Blacksmith, Inventor, Printer & Publisher amongst many other things! It came off the back of Woodblock printing, which developed in China around 200AD. This involved carving text into a block of wood, with the raised letters inked up. Paper was then placed on top and either manually or with a press, the pressure would form an impression on the paper. This was one of the first forms of printing, which was effective but obviously you couldn’t make any mistakes! Text had to be written out in full and once carved in, there was obviously no way of moving it. You were stuck and just had to start again! Guternberg built on this technique but with moveable type and made it so the device could be operated by hand - so much easier!

This started off the printing revolution in 1440 and was introduced to the whole of Europe. Back in the 15th century, it was used widely for newspapers and also books, with the most famous being the Guternberg Bible in which he created nearly 200 copies! This doesn’t sound like a lot nowadays, but when at that time there were only 30,000 books produced throughout Europe, this was a very significant amount. This also took more than 3 years to complete so it was no mean feat! Over the years this technique was widely popular, but of course as a society we are always looking for ways to improve, do a job quicker and obviously if it’s more cost effective - then even better!

Letterpress printing started to die out when other printing methods became available. Its natural successor was the rotary press developed in the mid-1800s, which used cylinders in which images to be printed were curved around. This was a lot faster and allowed for a continuous supply of paper to be fed through the press. Of course, this moved on again to Offset and Laser printing and a lot more recently, the art of digital printing where you can print straight from a digital file. So quick and easy! However, a recent revival with Artists and Designers alike, are reintroducing this old and classic method, to produce work which is more hands on and tactile and something which can be totally original. Working with a desktop publishing programme and digital print, we strive for the print to look perfect. With Letterpress, the results are dependent on the amount of pressure applied when driving the roller over the typographical elements, as thus creating a different and less polished look, but one which is very tactile and full of character. When creating a design, there are a few important things to remember such as to keep it simple and not to want something which is using transparency or a gradient. With ink going round on a roller, it really is all or nothing! Also bear in mind your use of colour. Ink can be expensive and normally 1 or 2 colours will work best. Due to its expense and time-consuming nature, nowadays Letterpress is used for small projects and runs of print such as invitations and greeting cards. It is very popular with business card design to give it a certain flair and style.

We all enjoyed our Letterpress workshop and came away with successful prints using different colour variations. It was interesting getting back to basics and learning the old art form and having something to take away with us was an added bonus. I didn’t realise the history behind the Print industry and how we have it so easy now. We take it for granted just how quick and easy it is to print large quantities and fix mistakes. A luxury that I’m glad we have!